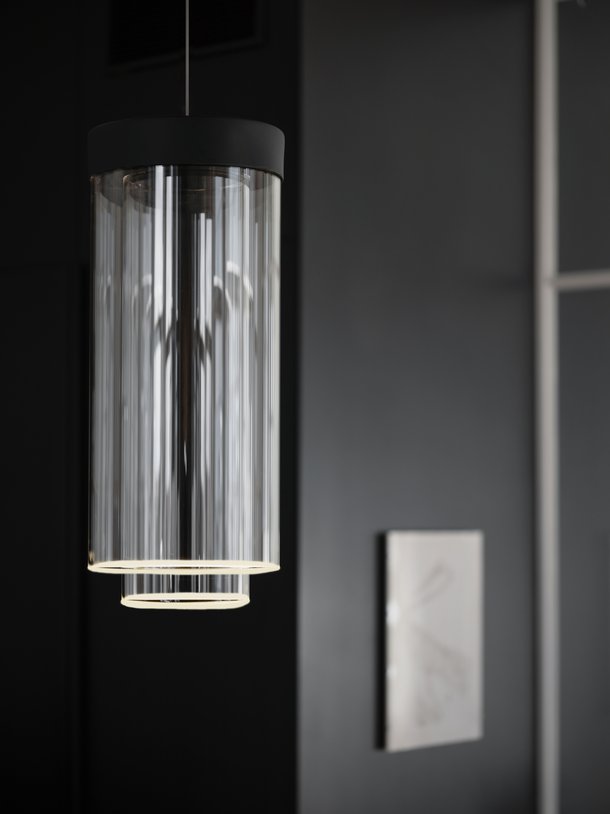 How did you come up with the Ghost Lights?

The Ghost range has been in development at Resident Studio in New Zealand for more than two years. We started off experimenting with manipulating and folding glass into different shapes, then sending various LED light sources through the shapes.

We were very impressed to see that light could turn multiple corners within the glass and still not reveal itself until it hit the outside edge. This led us to think very hard about which form a lit edge would ideally take.

And how did you arrive at this tubular form?

The folded forms inevitably ended up with lots of straight edges. While this was interesting as a study, the straight glass lines were hard and unwelcoming. In the end, we couldn’t ignore the allure of a glowing circle of light, so we embraced the curvature and began a deeper investigation into glass tubes.

Why is Ghost called Ghost?

The Ghost Light mirrors its namesake in that it holds an identifiable form, but it appears as an apparition due to the combination of two translucent tubes. This in conjunction with an invisible light source provides the trick.

Where are Ghost Lights best used?

The Ghost Lights are good all-rounders. Because they are so minimal, they are effortlessly decorative—but with 2700 lumens of output, they also provide a very healthy showering of light to work or eat under.

The form is also very minimal. Why did you want to create something so light and airy?

As a piece of design, Ghost has been reduced to only its most essential parts. We feel it really exemplifies the idea that the best design is in the details.

Ghost as a standalone object is also intriguing…

Yes, the two complementary glass volumes give the piece natural presence, even in the absence of light. Then once the light is turned on, it truly fulfills its potential.

The Ghost Floor Light takes its form in the opposite vein of the Pendant, in that it is longer, and its smaller diameter tube in inset rather than outset. How did you arrive at this outcome?

Again, this was a process of trial and error. We felt that the Pendant hanging should naturally extend down, but the up-lit nature of the Floor lamp suited the smaller halo’s housing within the confines of the larger tube.

With both versions we noticed a sense of movement between the tubes, like they are dynamic with one another.

How are the tubes produced?

The tubes are drawn in the same way that test tubes are produced. The process delivers geometrically precise tubes of various sizes with very high optical quality. These tubes are also highly transparent and scratch resistant.

What aspect of the Ghost light are you most proud of?

I am most happy that through perseverance and following our curiosities, especially as it relates to glass and light play, we are now able to offer the market a fundamentally new lighting option.